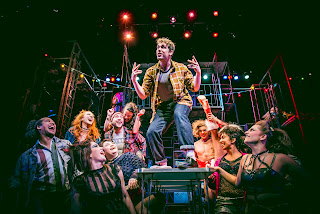 Amazing audiences at the Assembly Hall Theatre in Tunbridge Wells have raised nearly £8,000 in support of the victims of Manchester's bombing, a staggering amount carrying a powerful message about solidarity and justice in our community.

The terrorist attack on the Ariana Grande concert in Manchester left 22 people dead with 59 injured in the explosion moments after the singer left the stage.

The 20th Anniversary production of Rent opened in Tunbridge Wells on the day after the Manchester attack, as the full details of the tragedy were emerging. It was the production company’s wish to show support for the victims and with the backing of the theatre who shared the sentiment, it was agreed that a collection would be taken after each performance.

‘We have been overwhelmed by the outpouring of public support. Our patrons have given their generous support to the appeal, all money donated will be handed over to the "We Love Manchester” Emergency Fund in partnership with the British Red Cross which will help the families and dependents of those killed and injured in the attack’.

‘Myself and the Rent Company were greatly moved by the generosity of your audiences. We had a great week at the Assembly Hall and such a lovely venue to finish the Rent tour, with such responsive audiences.’

The cast made an appeal at the end of each show and the theatre’s front of house staff collected the donations. The running total was confirmed by Tunbridge Wells Borough Council and transferred to the appeal fund.