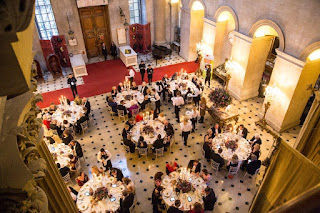 A charity dinner at Blenheim Palace has raised over £50,000 for an Oxford-based children’s and young adults’ hospice.

Hosted by the Duke and Duchess of Marlborough, the VIP event featured a silent auction and live music, and tickets to the charity black tie function were £1,000 to raise vital funds for Helen & Douglas House. More than 70 people attended the Dinner.

Opening music was provided by the world-renowned harpist Baroness Wigley, whose professional name is Elinor Bennett.

Elinor agreed to play in order to say ‘thank you’ to Helen & Douglas House colleagues for the tremendous love and support they shared with her two sons at the end of their lives in the 1980s.

The Rt. Hon. David Cameron, whose family also share a close personal involvement with the charity, was the guest speaker.

A further musical interlude was provided by talented young musicians: violinist Matthew Trusler and pianist Ashley Wass played a piece from the new CD ‘Wonderland’, which revisits the ‘Alice in Wonderland’ stories and features pieces by some of today’s most illustrious classical composers.

Matthew’s son sadly died when just a few hours old 10 years ago, and the proceeds of the CD are being donated to support Helen & Douglas House.

A Silent Auction held on the night raised over £30,000, with a bronze ‘Mother & Child’ statue raising an amazing £10,000 after being auctioned off in a spontaneous action by David Cameron.

'The evening was most definitely one to remember for a long time to come, and our heartfelt thanks go to the Duke and Duchess of Marlborough, and to all who worked so hard to make the evening such a great success,'

The charity is currently caring for around 300 families and they also actively support over 60 bereaved families from Oxfordshire and surrounding counties.

Helen & Douglas House provides medical, emotional and practical support helping families deal with the implications of living with a child who will die prematurely, so they can make the most of their time together.

The charity needs to raise over £5m a year to run the two hospice houses and to provide its specialist outreach nursing and family support and bereavement services.