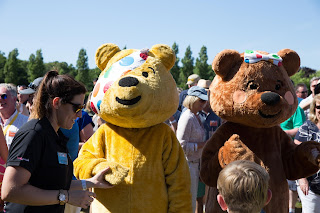 On one of the hottest days of the year, Saturday, 16 June 2017, Chewton Glen hosted the ultimate festival experience, organised by driving force and BBC Radio 2 broadcaster Chris Evans. This is the tenth year that Chewton Glen has supported Chris Evans’ fundraising efforts for BBC’s Children in Need appeal, and the anniversary celebration resulted in an exceptional ‘Festival in a Day’.

This was followed by cocktail making and an afternoon picnic before the evening entertainment began with a Champagne Taittinger reception among the trees of Chewton Glen’s heritage orchard.

A high spot of the evening was the surprise ‘flash mob’ when waiters and waitresses started to dance, encouraging guests to join in. Now that’s service!

Finally, screens that had provided a backdrop to the evening’s dining experience in the orchard were lowered to reveal a pathway illuminated by flaming torches to the festival village of tepee’s - the setting for the musical entertainment provided by the legendary Jeff Lynne’s ELO, Texas, Paloma Faith and, of course, Chris Evans’ lively DJ set.

‘It is always a tremendous privilege to help Chris and his team with their exciting plans for raising funds for such a great charity, but this year’s event has been truly remarkable. I think everyone has excelled themselves.

‘I would like to say a big thank you to all those who have put so much effort into the event, including my hardworking team here at Chewton Glen, all our suppliers and our friends who have been so generous.

‘Together they have ensured that our ‘Festival in the Day’ will help to make a real difference to the lives of children who benefit from those who donate to BBC Children in Need.

‘Our especial thanks to Chris Evans, who masterminded the Festival; in excess of £1.7 million was raised for 2016 Children in Need appeal with the live-on air ‘Dine & Disco in the Forest’ auction, possibly Jeff Lyne’s Mister Blue Sky was never sung at a more appropriate event.’