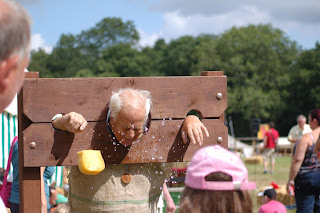 With less than one month to go until the one of the most spectacular mediaeval festival returns on the 5th, 6th, 12th and 13th August, The Loxwood Joust is delighted to announce its support of local charity Chestnut Tree House.

This well-known local charity will be providing entertainment for all in the Children’s Kingdom and for the cost of a groat, are giving children the opportunity to Pelt The Peasant, or Parent, with wet sponges. The Loxwood Joust then exchanges all groats for cash and the more peasants pelted, the more funds secured for the charity!

Chestnut Tree House is the children's hospice for East and West Sussex, Brighton and Hove and South East Hampshire, caring for 300 children and young adults from 0-19 years of age with progressive life-shortening conditions.

This is the third year that the Loxwood Joust has supported Chestnut Tree House, with £500 and £400 being raised for charities at the Pelt The Peasant attraction in the past two years.

‘We are thrilled to be a part of the Loxwood Joust again in 2017 and look forward to seeing you all in the Children’s Kingdom!’ So step back in time and experience the verve and vigour of a world where lives were harsh and hearts were passionate at this unique, fun and educational day out for all the family.'

Don't miss this fantastic day out in West Sussex from 5th August!