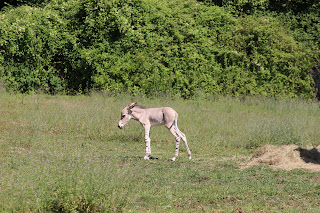 Staff at Marwell Zoo in Hampshire are celebrating the birth of a critically endangered African wild ass – giving a huge boost to one of the rarest animals in the world.

Nine year old Nadifa, who was born at the zoo, gave birth on Friday 14th July and both mother and foal are said to be happy and healthy. As mum is left to establish a bond with her new foal, it will be another few days until keepers determine the sex of the new arrival.

This is the ass’ second foal to be born at Marwell after she gave birth to a female foal in 2013. First-time dad Lars arrived from Safari de Peaugres in France in April last year.

The birth of the foal is a huge boost to a species that has been on the critically endangered list since 1996, with estimates suggesting that there could be around 600 left in the wild today.

'This is a great achievement for Marwell. We are one of only three collections in the UK holding a breeding herd of African wild ass, which makes its arrival so important. We are all really proud to see this wonderful new addition doing so well.'

The wild population of the African wild ass is based in the harsh and remote lands of Eritrea or Ethiopia. It is unknown whether there are any left in Somalia. Marwell has always been key in the conservation of this special breed and the first-ever British born African wild ass was born at Marwell in 1996.