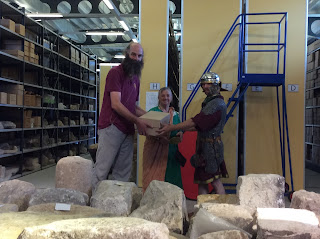 Last week the Butser IX Legion set off on an exciting journey to Fishbourne Roman Palace, to collect a few artefacts kindly donated by the Fishbourne team.

The artefacts date back to an archaeological dig from 1992 around the Fishbourne area, and include boxes of ceramic building material.

Since the dig, these materials have been catalogued, recorded and studied as archaeological evidence, and now the Fishbourne team have decided to kindly donate a few of these artefacts to Butser Ancient Farm, where they can be used to teach schoolchildren about Roman Britain through the Butser education programme.

Two members of the Butser Roman IX Legion arrived to collect the artefacts from curator Rob Symmons and take them back to the farm, where the Butser team will be able to offer children the chance to hold pieces of history in their hands.

Rob and the rest of the Fishbourne team are delighted that the artefacts have found a new home and will engage new children with archaeology, bringing the past to life and forging a connection with our ancestors.

What are these artefacts collected?


The artefacts relate to the Roman occupation of the area, which was one of the earliest places that the Romans occupied Britain. The local Iron Age ‘king’ Togidubnus was apparently receptive to Roman settlers, and may have aided the Romans in establishing their presence in the area. The palace itself may well have been the home of Togidubnus, who had become Romanised and affected a Roman lifestyle.

Sometimes, pieces of tile like this still have fingerprints inside them, so that you could essentially put your finger or thumb into the print of the same person who made it. What better way to bring ourselves closer to ancient people?

What better way to bring ourselves closer to ancient people? If you’d like to learn more about Roman Britain, join the team at Butser for their Roman Summer extravaganza, running throughout August and finishing with their Glorious Games & Gladiators day on Monday 28 August. More info can be found at here.
Museums