The LEGO® group to unveil world record build in Brighton 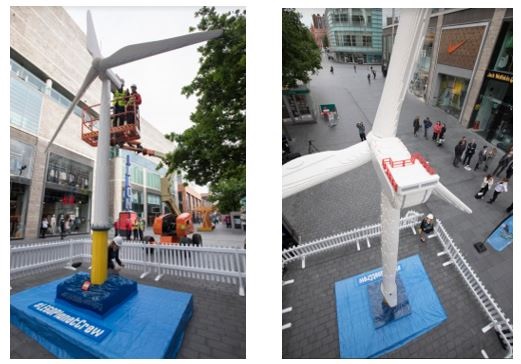 In May, LEGO was awarded a Guinness World Record for creating the world’s largest wind turbine made from LEGO bricks, and now the build is moving to its new home at Park Square, Brighton Marina.

Made with over 146,000 LEGO Bricks the impressive structure took 10-15 people per shift (with three shifts per day) and 600 man hours to complete!

The build was originally constructed in celebration of the LEGO Group reaching its target of 100% renewable energy capacity a whole three years early!

The wind turbine will stay in place at Park Square, Brighton Marina until early 2018.

LEGO supports all investment in renewable energy and we aim to engage with children on this very important issue. In fact, from the turbine’s new location, visitors will be able to see the new Rampion Offshore Wind Farm, the south coast’s first offshore wind farm. With 116 turbines standing at 140 metres to their blade tip, the wind farm will produce enough green electricity to power the equivalent of almost 350,000 homes, once it is fully operational in 2018. This is equivalent to around half the homes in the whole of Sussex.

The LEGO Store at Churchill Square Shopping Centre will also be hosting a Build the Change workshop on Saturday 4th November, from 10am to 3pm. The team will be running a day of environmental-themed building fun where visitors will be encouraged to use their creativity and imagination to build a renewable energy machine that can capture the wind and provide energy to power their lives.

LEGO® Batman will be making a guest appearance on Saturday 4th and Sunday 5th November between 11am and 2pm at the LEGO store where guests can come along to have their picture taken and take part in our free Make & Take event.