Marvellous May at Borde Hill Garden 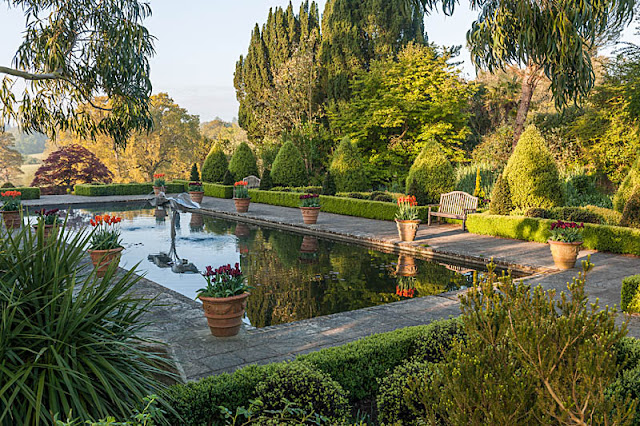 Borde Hill will celebrate their 125th anniversary this spring with a stunning display of rhododendrons, many of which were collected by the plant hunters of the Edwardian age.

Borde Hill near Haywards Heath in West Sussex was purchased in 1893 by Colonel Stephenson Robert Clarke with the express intention of creating a magnificent garden.

An enthusiastic collector, Colonel Stephenson Clarke was one of the sponsors of the great plant hunters of the early 1900s.  He filled his garden at Borde Hill with rich and diverse trees and shrubs from all corners of the world including China, Tibet, Burma and South America.

In his book of 1932, Colonel Stephenson Clarke says of the rhododendrons:
"Borde Hill may be said to possess a more or less representative collection of these beautiful plants including most of the fine species introduced by Wilson, Forrest, Rock and Kingdon Ward...a large number of which have been raised here.”

Visitors to the garden near Haywards Heath can see these shrubs grown to trees from Rhododendron seeds collected by intrepid explorer George Forrest on his 1924 expedition to China. Forrest's contribution to natural history in western China was unrivalled.  He discovered 1200 plants species new to science.  He has been called the Scottish Indianna Jones of the plant world and was given the Royal Horticultural Society's Victoria Medal of Honour in 1921, and the Veitch Memorial Medal in 1927.

This relationship between sponsor and plant hunter is still in evidence today at Borde Hill as the current guardians - Eleni and Andrewjohn Stephenson Clarke remain committed to introducing new and interesting species to the garden.  The couple will unveil the newly designed Round Dell (by RHS medal winning designer Sophie Walker) in July.  This area of the garden features plants collected by the modern day plant hunters at Crûg Farm and is surrounded by fantastic chusan palms planted by the Colonel.

Eleni and Andrewjohn are also keen to underline the horticultural pedigree of the garden and keep the Colonel's legacy alive.  As part of their 125th anniversary celebrations they have arranged for writer and historian Caroline Holmes to deliver a fascinating talk on the Edwardian garden.

Caroline Holmes says: "The Edwardian Garden can be described as the original www for a glorious array of hardy and exotic plants for gardens, large and small, its extensive plant palette is one to celebrate not fear. The evocative history and contemporary setting of Borde Hill is both golden and delicious.”

Other treasures to enjoy in May at Borde Hill include; the deciduous Knapp Hill azaleas which provide a kaleidoscope of colour in the Azalea Ring, Kornus kousa over 80 year’s old, late flowering magnolias like Magnolia obovata, Magnolia fraseri and Magnolia officinalis, other flowering trees include davidias, stuartias, halesia and many bulbs.
Borde Hill’s Liriodendron chinense will also be one to admire as it celebrates its 115 birthday this year. The Italian Garden will be in full colour thanks to 3,000 tulips and the woodlands will provide magical colour thanks to giant rhododendrons and a carpet of bluebells.

Special events in May include:

16 May    (10.30am - 1.30pm )     The Edwardian Garden, Golden and Delicious.  Caroline Holmes will evoke memories of a golden afternoon, glimpsed in black and white photographs and nostalgic cottage paintings with architecture inspired by the Mediterranean. Includes Refreshment on arrival, Talk and garden walk; Tickets: £24.00 (RHS Members/Friends of Borde Hill), £30.00 non-member

23 May     (10.30am – 2.30pm)    My Garden is my Sanctuary.  Join this one day course to improve self-awareness and confidence skills in this relaxing and peaceful setting. Workshop activities will include exercises using nature as a backdrop and resource, story, sensory awareness exercises, solo reflection time and sharing with others. Please see website for more details and tickets.