Comedy, nostalgia and drama at the Holiday Inn Winchester 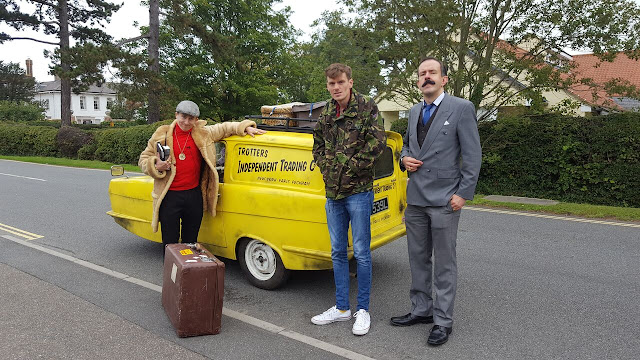 Following on from the Holiday Inn Winchester’s recent success with their sell-out ‘Fawlty Towers Comedy Dining’ event, the 4 star hotel has created a programme of new events for their autumn season of entertainment. The season will launch with ‘Fabulous? Absolutely’ on Friday,12th October, an Absolutely Fabulous tribute that will bring all the drama and comedy of that much loved TV series into the hotel, while guests enjoy a three course meal, created by the hotel’s AA Rosette Award winning head chef and his team.

The hotel’s Sarah Waddington reveals a little about the performance:

'The drama will unfold around our guests, who will see the main characters attending a Gala, only to arrive and find out that they are not on the guest list. They then try various hilarious ways to get access to the event.'

The evening starts at 7pm, when the gathering guests will start to see the scenes unfold as the cast mingle and perform around them. Then at 8pm a three course meal will be served, while the performance continues. Tickets are £36 per person.

'We had a promenade theatre event at the hotel a few years ago and it was very successful and memorable, so it is great to bring a live theatrical performance back again and present it to the public in a non-theatre setting' continued Sarah Waddington.

The hotel will also be presenting a Christmas themed comedy performance on Saturday 24th November, featuring characters from the hugely popular Only Fools and Horses TV series. ‘Del Boy’s Comedy Dinner Show’ aims to be a whirlwind tribute to everything Trotter and everything to do with Christmas.

'This event is perfect for pre-Christmas celebrations, office parties and groups of friends to come along to. Party games, pantos and presents will be part of the theme of the drama that will be revealed to our guests as they dine, along with the usual Del Boy Trotter chaos!' said Sarah Waddington. Tickets will be £36 including a three course meal, festive table decorations, coffee and mince pies with 7pm arrival and dinner at 8pm.

Also leading up to Christmas the hotel has booked Abba’s Angels, an Abba tribute band for another evening of entertainment and fine food on Friday, 30th November from 7pm until midnight. There will be a dance floor for those who want to express their inner-Abba and the event includes a three course dinner, party novelties and the evening of entertainment. Tickets £42 per head (over 18’s only).

To end the year the hotel will be ‘Partying through the Decades’ on New Year’s Eve with live music from the 60’s, 70’s and 80’s, with fancy dress of the decades optional. The event includes a pre-dinner glass of Prosecco, a three course meal, and the entertainment, with tickets at £75 per person and special packages for those wishing to stay overnight at £249 per couple including the event, overnight accommodation and breakfast, with extended check out until 1pm for those wanting a relaxing start to 2019.